I am Mireille and when I was still studying, I became a member of Tiburón. When I started to work I remained a member, and now I am a sponsor member. It seems like I find it really difficult to let go of Tiburón entirely.
When I think back to my time as part of Tiburón, the thing that I remember best is probably my first competition. I arrived as an inexperienced little me at Tiburón and they taught how to properly swim. That is also when I was told that I coulnd’t miss THE(!) competition in Maastricht. They promised me that the level of swimming didn’t matter, and they were absolutely right! 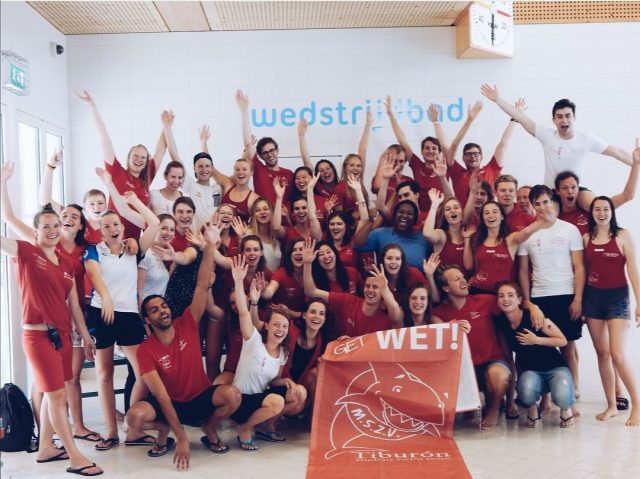 It was insane to swim at a competition for the first time ever, to experience the real team-feeling, and to see with my own eyes how big the party actually is. Everybody was just chatting with each other and cheering each other on by screaming and singing songs. At that point, it became clear to me what an amazing and “gezellig” team Tiburón actually is and I started to get to know more and more people. It was a lot of fun to experience all the parties with Tiburón and how fanatically every shark dresses according to the themes. As a real Maastrichtenaar, I have to say that carnival taught the team well because sharks really know how to dress up!

There are at least a thousand more things I could say about Tiburón and my time as a member, which makes me so happy that I joined this magnificent association 5 years ago! ❤️