My name is Simone, and this is my third year as a student in Maastricht and as a member of Tiburón. Last semester, from September till December, I was on exchange in Belfast, Northern Ireland. Lisa asked me to write a little somethin 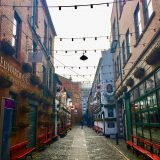 g for you all about my experience there, so here it goes!

As some of you may have noticed, I have spent most of my time sitting beside the pool instead of in it since I have been back. I fully blame Belfast for this habit, for two reasons. Firstly, the pool in the university gym was nowhere near as fancy as our beloved Geusseltbad. In fact, they did not even have the flags up in the pool at the five metre spot, which resulted in a nice bruise on my head the first time I tried swimming backstroke there… Secondly, I have to give credit to my fabulous friends who dragged me along to legendary pre-drinks and clubs almost every Wednesday. I won’t go into too much detail here, but let’s just say this: the stereotypes about the Irish and alcohol are definitely true! If you would like to hear stories about boys throwing an egg around the kitchen, skateboarding through the hallway while throwing a rugby ball, or playing tennis with a cucumber, just come sit with me by the side of the pool and I’ll tell you all about it!

Instead of swimming or studying, I spent most of my time exploring the city of Belfast and other gorgeous ci 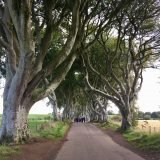 ties in the country. We went on numerous hikes through beautiful nature, and we saw iconic sights such as the Giant’s Causeway and the Dark Hedges (as seen in Game of Thrones, for the fans out there). Fortunately, we were lucky enough to have good weather on about 90% of our trips. The other 10% we got absolutely soaked and completely blown away, which was so ridiculous that we had a good laugh about it anyway.

To end my blog, I would like to teach you two Northern Irish slang words which I picked up during my time there. Wee is the first word, and it actually does not just mean “a little” or “a bit”. No, Belfast people use wee in every possible way, it basically functions as a sentence filler. For example, one may say “Oi, did you see that wee lad over there?” or “Would you like a wee bag with that?”. Another word you’ll hear a lot is craic. It sounds a bit like “crack”, but it is definitely not the same. Craic means fun, or enjoyable time spent with others. People often ask: “What’s the craic?”, which is essentially just another way of asking what’s up. When you had a fantastic time, you can say “The craic was 90”. To give a final example sentence: if you’re wondering whether you should sign up for this year’s wee Members’ Weekend, my answer is: you totally should, it’s always absolute craic!