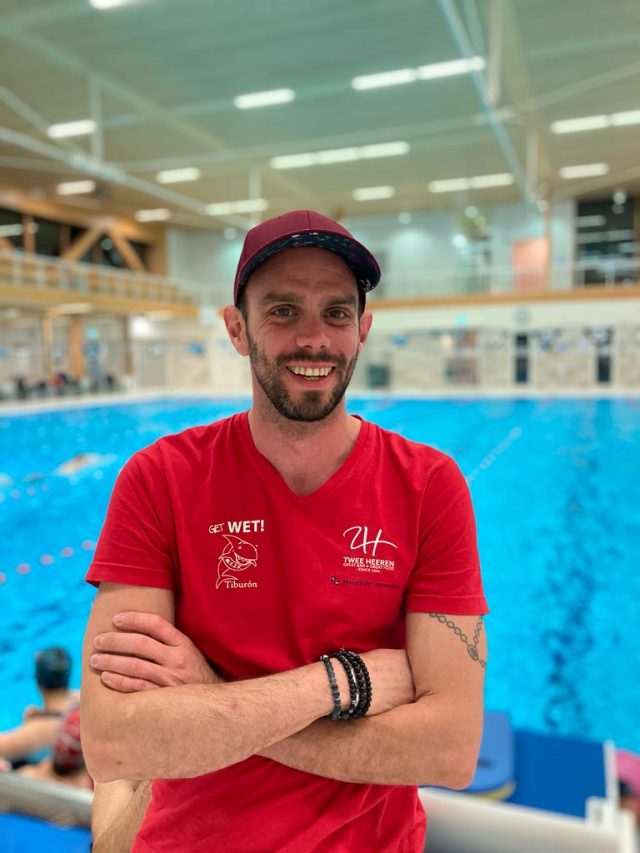 Almost feels like yesterday that we announced the last member of the month, time is really flying. So no time to lose, today we will tell you a bit more about Sander’s time with Tiburón!

This love story already started waaaaay back in 2010. Not to make you feel old sander, but most of us were still in High School at that time. As you can tell he has been a member for a really long time already, so you must think, he was always a very dedicated swimmer and passionate about it. Let me tell you, this was not the case. Back then, he had just started studying and enjoyed his student life when his by-then roommate asked him to join Tiburón. At first, he was not convinced, little did he know what an impact joining Tiburón would have on his life.

After all, he eventually joined and loved partying with the fellow sharks. I mean, who doesn’t? However, you could barely ever meet him at practice. In summer 2011, Sander made the decision to change that and started practicing in his free time during the holidays. At first he could barely swim one lane… Quitting smoking and practicing about four times a week lead to a quick change of that though! After summer you could meet him more and more often at practice and not only at the legendary partys. His love for swimming only increased over the years, so much he eventually became a trainer of the lovely sharkies. He gave practice next to swimming himself and also started other sports next to swimming. What a success story right? From not being able to swim even one lane to becoming a very sporty person and even a trainer. What a way to turn your life around. This meant so much to him, that he even decided to get our shark tattooed! (See picture) What a declaration of love to our shark.
After joining tons and tons of partys, practices, NSZKs, Members weekends, Batas and INKOMs he thought it would be time to leave in 2020. Well, that did not last too long as you know, since he very soon started to miss the legendary Tiburón spirit and re-became an active member and even our trainer. Now he is back for a while already, giving technique practice to on Mondays, seeing our sharks improve and thrive in the pool. Sander has gone far and beyond for Tiburón over the year, being member of the month will not make up for that. Luckily, the club has decided that he should become an honorary member! Only three people had the honor so far, so it is something very special. Thank you for everything you have done for us, Sander!

previous
What is it like being President?
next
Club Championships
JOIN THE TEAM