Hello dear Sharks! The 19th Board of Tiburón was installed on Wednesday 18 September and we are introducing ourselves to you one by one in the Board Introduction blogs. On this First Friday of the month, it is time for the last (but certainly not least) member of the board to introduce herself: our brand new, jawsome Activity Coordinator Nina!

My name is Nina and I’m 22 years old. I’m the activity coordinator of Tiburón, following in the footsteps of 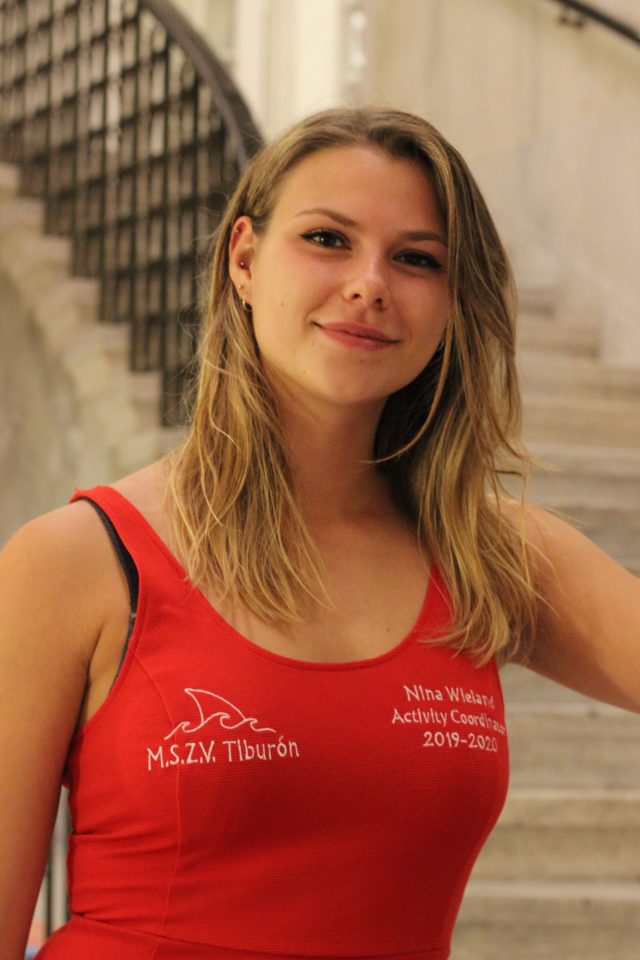 Jorg after having been in the Accie for a year. This is my third year in Maastricht and also my third year as a Biomedical Science student. I grew up in Arnhem, which is a city in the east of the Netherlands. Before I decided to come to Maastricht, I studied Psychology in Nijmegen for a little while. This was a total disaster, so I quit and worked in hotels for the rest of the year (which is honestly not as bad as it sounds). In my first and second year at Tiburón I went to all the activities that were organised, so becoming activity coordinator was a pretty obvious choice for me!

I started swimming because I always loved it as a kid, and during the INKOM I had some amazing moms and dads from Tiburón, who re-introduced swimming to me and especially showed me how much fun Tiburón is!

I’m the board’s digi-mom, which means you can find me teaching Kristel what a boomerang is on Instagram, or creating beautiful WhatsApp stickers on the side of the pool (even though this was not initially in my job description). Furthermore, I like to spend my time collecting beer coasters and watching trashy dutch shows on Videoland (the Dutch and trashy version of Netflix, it’s perfect).

I’m not very good at describing myself in this way, but give me a few beers and you’re probably going to get some funny stories out of me!

P.s. Even though this is the last part of this series, don’t be sad! There is more content coming your way soon: the first HAAI club magazine will be published this month! Until then, you can read the other parts in the series if you haven’t done this yet: